1960 Cowboys In A Bazooka Design 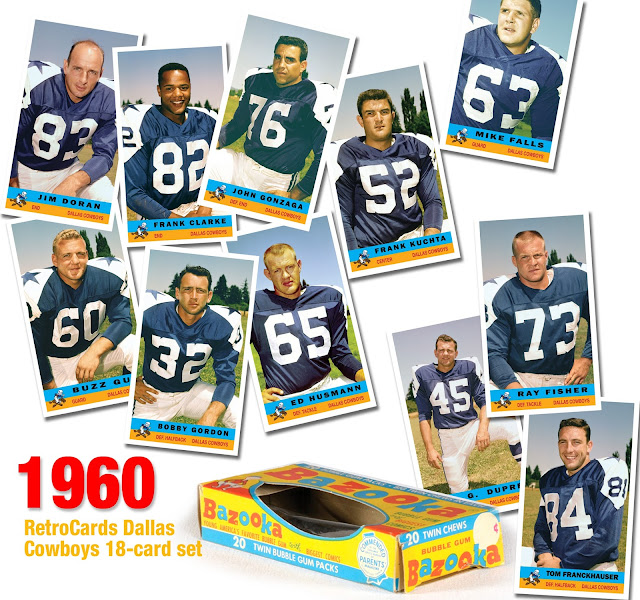 If you were lucky enough to get the last pack of Bazooka gum from the candy store between 1959 and 1971, you may have found a baseball or football card on the back to cut out.  Cards varied from year to year in size and style and are rarities for today's collectors.
Those who have an interest in the early days of the Cowboys know how late in the game they joined the NFL during the 1960 season.  It was so late that they were not able to participate in that year’s draft and had to rely on the expansion draft to secure players.  The pickings were slim but several able-bodied players were given tryouts and some became long-time contributors whereas some just where there for a “cup of coffee.”
This RetroCards set is styled after the 1959 football Bazooka cards and gives this first Cowboys team a close look by featuring some very obscure players, including a few who didn’t even make the team.  Series One includes: Fred Cone, Bobby Gordon, L.G. DuPre, Frank Kuchta, Buzz Guy, Don Healy, Mike Falls, Ed Husman, Ray Fisher, Gerry Delucca, Bob Fry, John Gonzaga, Frank Clarke, Jim Doran, Tom Franckhauser, Gene Cronin, Dave Sherer, and Fred Dugan. Order your set here.
Posted by Matt Williamson at 6:31 PM No comments: 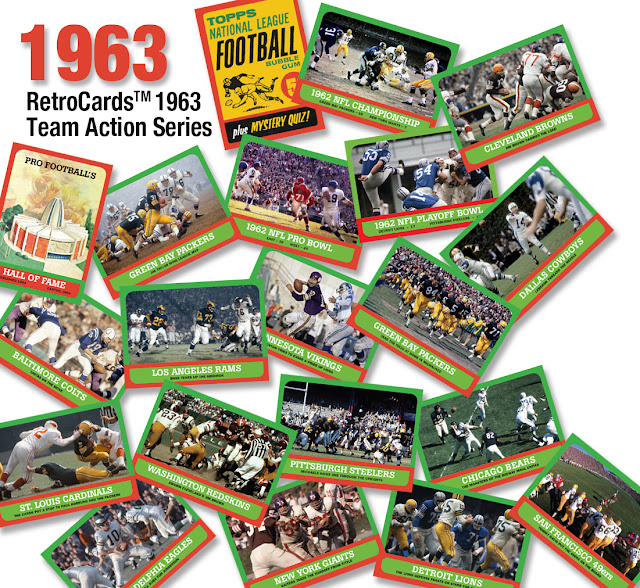 The 1962 NFL season was dominated by the Green Bay Packers who, at 13–1, exemplified what may have been the strongest Lombardi team ever. A Thanksgiving drubbing by the second strongest team, the Detroit Lions, barely slowed them down. The competition for players with the three-year old American Football League began to heat up as television ratings continued to rise.

Make sure to check out all the individual team sets that contain 18-22 player cards of guys that didn't have cards in the original set.
Posted by Matt Williamson at 5:21 AM No comments: 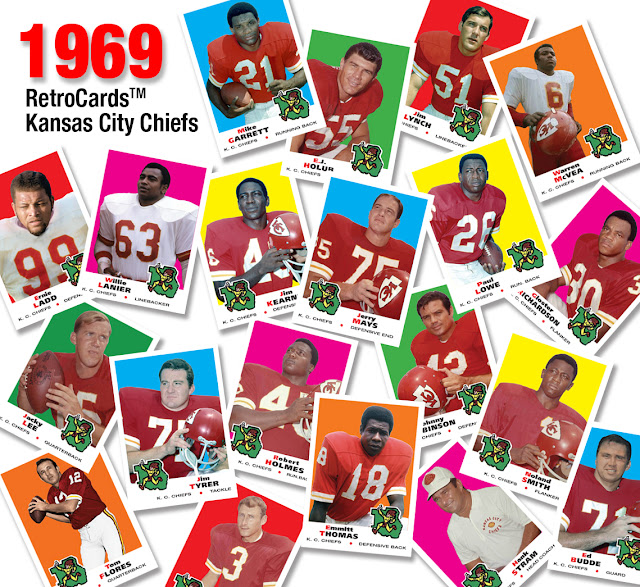 The Kansas City Chiefs of 1968 put a team on the field that went 12–2 and had 10 All-Stars but couldn't advance past the first round of the playoffs, losing to arch rivals the Oakland Raiders. In 1969, one of the toughest defenses ever led the team to Super Bowl IV. The defense led the AFL in fewest rushing and passing yards allowed and the offense kept rolling even when Len Dawson went down with an injury.

In the playoffs, they won on the road to the the defending champs the Jets and despite losing to the hated Raiders twice in the regular season, the Chiefs took them in the AFL Title game en route to Super Bowl IV. Against the Vikings, the Chiefs were two touchdown underdogs and ended the first half with a 16–0 lead. Their rushing attack kept the mighty Purple People Eaters guessing all day, while the Chief's defense rushed Joe Kapp and Gary Cuozzo, forcing three interceptions. Otis Taylor put the game out of reach with a 46-yard catch and run as the AFL Chiefs beat the NFL's best. 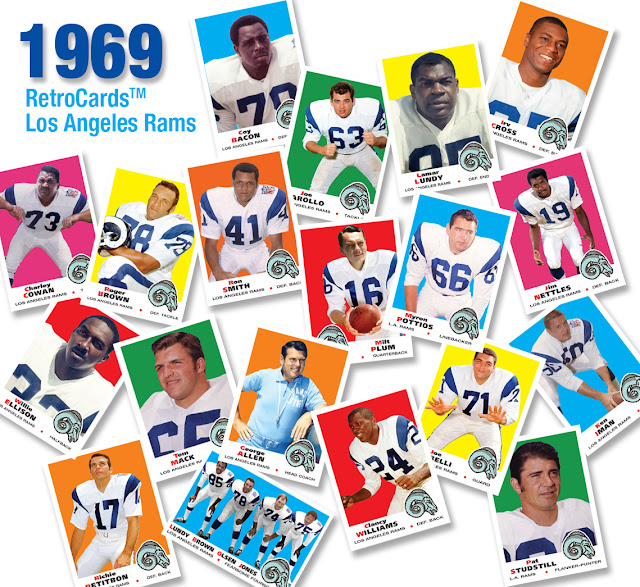 The 1966 Rams finally took a step into winning territory under first year head coach George Allen with an 8–6 record. The former underachieving Rams improved to 11–1–2 in 1967 and 10–3–1 in 1968, miking them one of league's best. Though they did not qualify for the playoff in 1968 despite their 10-win season, the Rams had put together one of the most talented rosters in the NFL.

Offensively, the Rams had balance and depth but it was the defensive unit that captured headlines with the Fearsome Foursome. Deacon Jones, Merlin Olsen, Roger Brown, and Lamar Lundy plus up-and-comers Gregg Schumacher and Coy Bacon were as good as it gets as the defense continually set the table for the Rams offense led by Roman Gabriel. 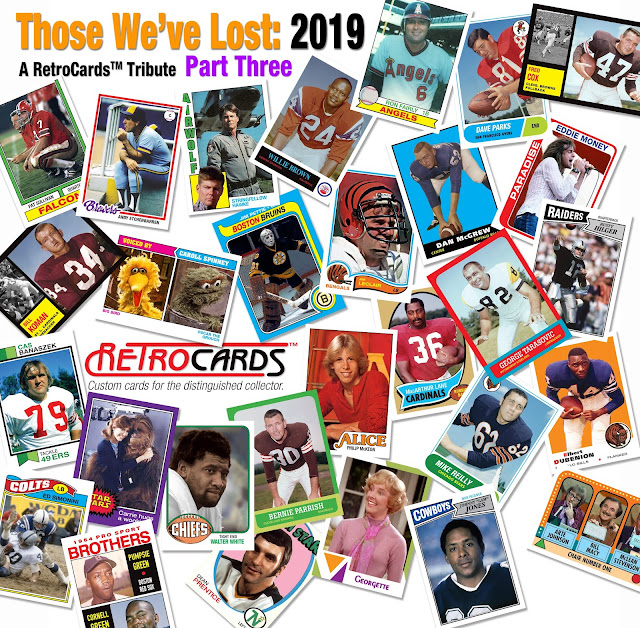 This brief mention is a slight wink and nod to the many sports heroes and pop culture figures who have colored our world. Happy New Year!


Posted by Matt Williamson at 8:13 AM No comments: 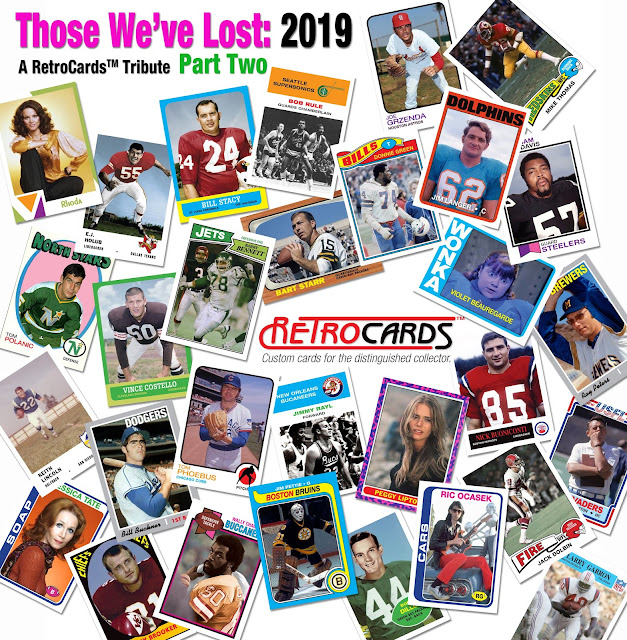 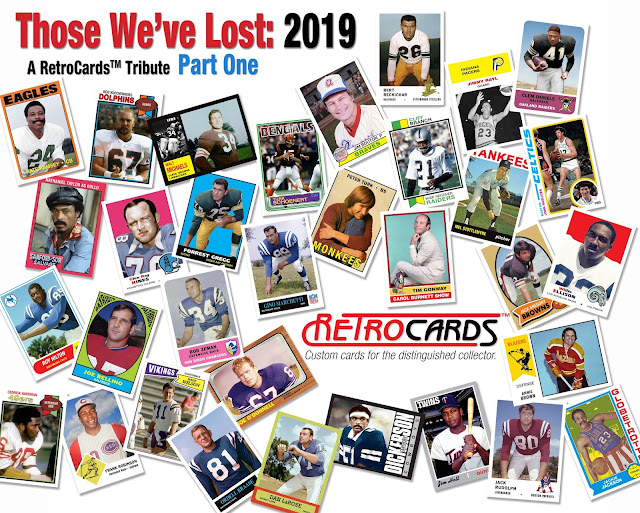 As we approach the end of another year and another decade, RetroCards will take the space of the next couple of posts to honor some our childhood heroes from the sports and pop culture worlds. We are starting to lose our heroes at an alarming rate.

Posted by Matt Williamson at 5:01 PM No comments: